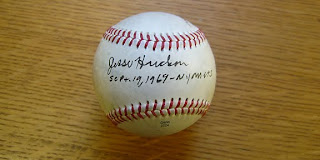 No sport plays to one's imagination like baseball does. It creates a sense of lore and mystery that rivals mythology. So it is no real surprise that the first man to enter the history of the New York Mets only to exit after a single appearance was named Jesse James Hudson.

Jesse was born on July 22, 1948 in Mansfield, Louisiana. The New York Mets drafted him on June 6, 1967 in the 11th round of that year's amateur draft. Thus began the professional baseball career of the young left handed pitcher still only 19 years old on that day.

The country was experiencing many great things in the year of 1969. Woodstock, the Apollo Moon landing, and the debut of the Brady Bunch television series on ABC. Overshadowing it all for me was the improbable season of the "Miracle Mets". A team that had only a few years earlier recorded the most losses in a season now was challenging the Chicago Cubs. Fighting for the chance to become the first National League East champion in newly formed division play.

September 19, 1969. The Mets were playing the second game of a double header against the Pittsburgh Pirates at Shea Stadium. The Pirates had claimed the first game 8-2 and were again leading 7-0 in the second game. The manager Gil Hodges had pinch hit Bob Heise for the pitcher, Ron Taylor in the bottom of the seventh inning. So a new hurler was to enter the game to start the eighth. Hodges summoned the lefty from the bullpen. Wearing number 38 on his home white uniform, Jesse was about to make his major league debut.

Hudson retired the first batter that he faced (Jerry May) then walked Freddie Patek. The second out of the inning came at the expense of the opposing pitcher, Luke Walker. Pittsburgh lead off hitter, Matty Alou followed with a single and moved Patek into scoring position. Jesse surrendered a run by allowing an RBI double to then rookie Dave Cash. The score had climbed to 8-0 in favor of the visitng Pirates when future Hall of Famer, Willie Stargell stepped to the plate. "Pops" Stargell had already homered earlier in the game. Our Hudson avoided any further damage as he stranded the two base runners by striking Willie out to close the inning. Jesse was now officially a major leaguer and New York Met.

The Mets failed to score in their half of the eight inning and Hudson would return to throw the top of the ninth inning. This time more effective as he tossed a scoreless frame while striking out two more batters. It would prove to be his last time on a major league mound. The New York Mets of course went on to defeat the Chicago Cubs by a full eight games in the final standings. Jesse Hudson did not find his way into any other games that season. He returned to the minors in 1970 and was never to pitch in New York again.

His single game of the magical 1969 season was to be his lone appearance in the major leagues and places him in team history as the first of the "one game" Mets.

Jesse signed and dated this baseball and card for me in October 2007 from a request sent to his home address. 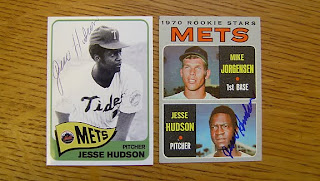 LEE HARMON
Westfield, Indiana
I am a lifelong New York Mets fan that grew up in the midwest. I have followed the club and it's rich array of characters throughout the years. Perhaps the most special of which are the "one game" appearances. These men each have a terrific story and honor the legacy of the great Archibald "Moonlight" Graham. As an autograph collector of the Mets team I will be posting my successes here as well. The focus of my collection is to add a signed baseball card for each man to appear in a game for the Mets. I will be posting examples of these here.